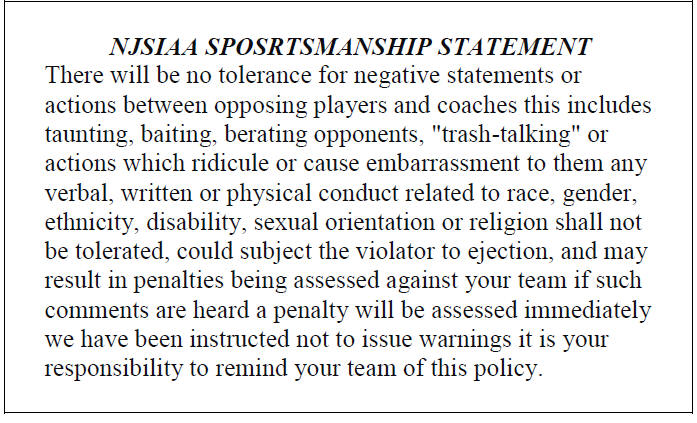 Beginning with the 2016 season, umpires will be required to issue a warning to coaches before restriction to the bench/dugout or ejecting them as part of a new penalty progression to promote preventive officiating.

The revision to Rule 3-3-1 Penalty was one of two changes recommended by the NFHS Baseball Rules Committee at its June 7-9 meeting.

Previously, issuing a warning to an offending coach was optional for umpires, who will now restrict to the bench/dugout or eject coaches who commit a violation after previously being warned for a minor offense. However, coaches can still be ejected on a first offense if it is deemed to be major.

Also part of the modification to Rule 3-3-1 Penalty, coaches who receive a written warning (Rule 10-2-3) will be restricted to the bench and/or dugout for the remainder of the game.

“The new rule change has initiated a penalty progression, starting with a written warning, restriction to the bench/dugout and subsequent ejection from the contest,” said Elliot Hopkins, NFHS director of sports and student services and liaison to the Baseball Rules Committee.

The changes to Rule 3-3-1 Penalty will help to de-escalate contentious situations and allow coaches to dictate their status in the game by their behavior, Hopkins said.

“A successful game official practices preventive officiating, and this new penalty progression will allow the official to issue penalties that give the coach the opportunity to remain in the game and teach his players.”

The other change approved by the Baseball Rules Committee is an addition to Rule 3-3-1. Article “q” will state that a coach, player, substitute, attendant or other bench personnel shall not “have any physical contact, spitting, kicking of dirt or any other physical action directed toward an umpire.” The addition of article “q” serves to clarify other behaviors that would result in an ejection from the game, Hopkins said.

“Bad behavior that is being imitated from other levels has no place in education-based athletics and will not be tolerated,” Hopkins said. “If we are to continue to use sport to teach life lessons, then we have to ensure that appropriate behavior and conduct are modeled from those adults in the role of coach/teacher.”

In addition to the two rules changes, the Baseball Rules Committee approved three Points of Emphasis for the 2016 season. Points of emphasis are developed by NFHS rules committees and should receive special focus and attention by officials, coaches, players, fans and other leaders within the high school setting.

Points of Emphasis developed by the Baseball Rules Committee for the 2016 season are as follows: